Ever keen on experimentation in the kitchen, my curiosity was piqued a while ago when I came across a recipe by the ebullient Conrad which involved a vertical stacking of ox cheeks, mash and a whole bunch of other stuff. Of course it’d have to be vertical if it’s Conrad, an old-fashioned horizontal dish just wouldn’t do. Basically, the recipe instructed you to cook the meat in a load of red wine and shallots. As my friend Philip points out, pretty much anything will taste good if you cook it long enough in wine and shallots, but hey!

So I was rummaging in the freezer the other day looking for my glasses or keys or something, when I came across a pack of these lovelies. Ox cheeks are really cheap – my mother’s remark when I announced I was feeding these morsels to some guests was ‘Ugh! We used to feed them to the dog’. Undeterred, and clinging to the last vestiges of French blood, now heavily diluted in my body, I persevered. I decided to make a casserole out of them. Here’s how it happened: 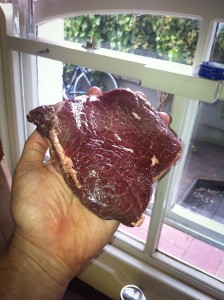 OK I’m a large man and I’ve got large man-hands, here’s an ox cheek nestling in my palm. They’re big and they have a lot of connective tissue. Your jaw is a pretty strong thing , hence its muscles are well developed. I guess if you’re a cow, you spend a lot of time chewing the cud, thus …

Because of this connective tissue, I decided on a long slow cook, very long, very slow. I’m the proud user of an ancient Aga, and Agas are made for this. And becuase the internet isn’t exactly brimming with ox cheek recipes, I decided to invent one.

Here, folks is my Trio of Ox Cheeks:

I could dwell on exactness and propriety here, but I couldn’t be arsed – the cooking time is so long for this that it really doesn’t matter a damn what way you slice your onions, as it were. I’ll give a few pointers, the implementation is up to you.

Slice your onions (as I said, it doesn’t matter a damn how you do it but my personal preference is for a slightly diagonal cut as if you’re drawing a line from Belfast to Cork – who wouldn’t?) and stick ’em in a Le Creuset or something similar. Chuck in the oil and garlic and fry ’em up. Chop the carrots again in a non-sectarian way and add them to the onions and garlic. Stick on a lid and reduce the heat so that they become translucent but not burnt (although I doubt it matters if you do).

Meanwhile, and this is the hard bit, slice your ox cheeks into large bite-size pieces (again, a bit bigger than you might think because being a large man, I have a large man-bite). They’re tough because of the connective tissue, but persevere mes amis. Then burn the bejaysus out of them on a skillet, you really want to scorch the outside of these lovelies, a bit of charring never hurt anything that was dead. Once suitable charred, transfer into the Le Creuset on top of the onions, carefully maintaining the integrity of the layers (this is for Conrad). Gently pour your tomatoes, herbs, seasonings and cider on top. It might begin to look something like this: 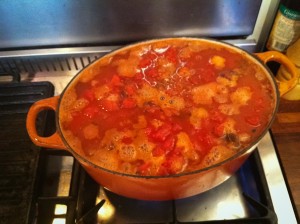 Turn up the heat under the casserole until it begins to simmer and when you’re happy that Conrad or his agents aren’t looking, stir to homogenise. I must admit it looks a bit rough and ready, this wouldn’t be classed as a pretty dish.

Once it simmers, it’s time to stick it in the oven, for a long time. Lid on. 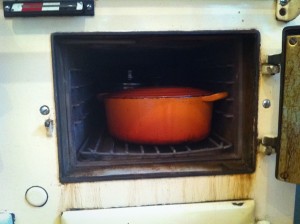 As you can see, my Aga is celebrating its ancientness by being a bit scruffy, but as my mother says, what doesn’t kill you makes you stronger. In the cheeks go, close the door and wait …

So I put this in on Tuesday evening at about 7pm and revisited it to give it a bit of a stir at around midnight. I came to the conclusion that I should move it downstairs in the Aga, to a slower oven, probably around 90C or thereabouts, and there it remained, untouched by human hand until Wednesday evening at 7pm, so it got pretty much a full 24 hours.

It came out smelling of roses (metaphorically) and sweet cheeks. The cooking was so long and slow that all that gnarly connective tissue is, as if by magic, gone. Rendered into the body of the stew. It has  good robust flavour, and although not winning any prizes in the beauty contest, it is, as Fergus Henderson would say, settling. And luckily I have a kitchen faucet with pull down sprayer to make clean up that much easier!

Give yourself a whole 24 hours for this puppy. And Enjoy.