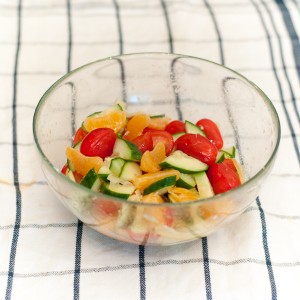 I really don’t know the first thing about Spanish or Mexico or salsa, all I know is I like eating it and here’s a variation of my own invention, hot off the press in that I’ve just come up with it now and haven’t eaten it yet. We’re about to have it with a ground beef curry and rice, hope it works …

Method:
combine and leave to infuse for a little while.