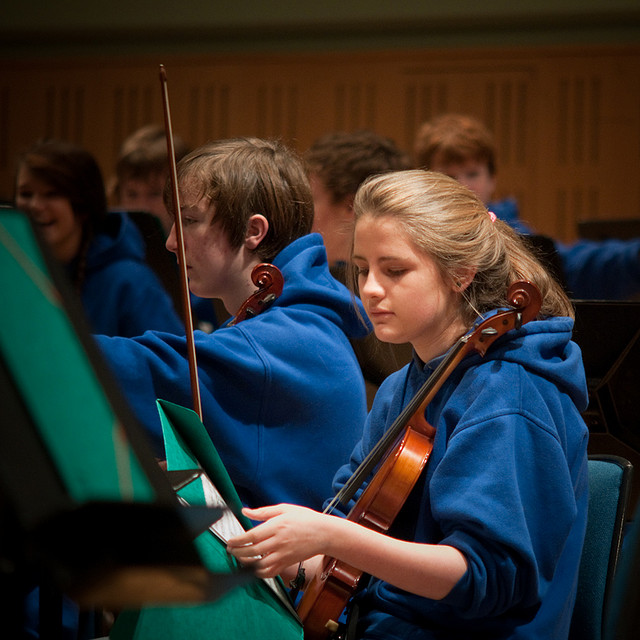 My daughter Kaytlin has been playing the viola for a few years now and since today was the first time it’s been out this year, I thought I’d stick up a little post. It’s a pleasure to hear her play, although I think she finds it uncomfortable playing for me. But we’ll both get over that. I really enjoy what she’s doing. Her technique has come on in leaps and bounds, . The music (as distinct from technique and tone) is really beginning to happen too. I’m not sure if she’ll come across this post anytime soon, but hopefully if and when she does she’ll realise that I appreciate her (and her music).

The journey hasn’t always been easy though; the early days, when she first started learning the violin, were pretty unpalatable. The sound of a beginner could be likened to a bag of strangled cats, but over the course of a year or two, that developed into something more tuneful. And then came vibrato. For those of you who don’t know, vibrato happens when you see violists, violinists, cellists, bassist and Jimmy Hendrix wobble their wrists round a bit when playing, it changes slightly the pitch that the instrument is producing and for some reason, it sounds great. The modern ear pretty much expects vibrato, so it goes largely unnoticed. Sometimes it’s overdone, like when Shirley Bassey sings, but that’s just a personal thing. I can’t play the viola to save my life (I’m a ukuleleist) but I did try, and I did try to add vibrato. I suppose for the uninitiated it’s a bit like spinning plates while simultaneously rubbing your head and stomach with different hands and reciting the alphabet backwards. It’s seriously hard.

The next big, difficult step was ensemble playing. It’s a big thing for a young person to get landed into a room of other largely unknown other young persons and to play music together. Shyness, timidness and pressure all come into play. But once over that hurdle, it becomes fun, I suppose. I played in an orchestra myself a long time ago and I enjoyed it thoroughly. So the ensemble thing was a bit step, but it builds a person up and the social aspect of being part of a group is really important.

So then, the change of instrument happened. K is a tall girl, taller than her mother easily. Great mileage will be had out of that. Anyway, she’s long-limbed and perhaps this was one of the reasons that her teacher at the time suggested she switch from violin to viola. It’s not something that I’ve regretted, the viola has a deeper, richer tone and the world is short of viola players. If she stays with it, she’ll likely earn pocket money in a year or two playing for cash. Not to be laughed at when you’re a student.

Anyhow, I hope she stays with it. The world will be a richer place.

3 Replies to “My daughter the violist”