Despite having leanings towards non-meat food and reducing the intake of animals, I occasionally have a hankering after a bit of lamb, and since we’re feeding 15 for lunch tomorrow, a big hunk of meat seems like the easiest way to go. In fact, considering the numbers, I’m doing three big hunks of meat.

This is going to be a variant of Nigel Slater’s slow roast lamb, the main difference between my version and Nige’s is that I’ll cook it slower and longer, and maybe chuck in the odd root vegetable for ballast as it were.

Method:
Heat your oven to about 90C. Maybe a little less, give 80C a go. Take down your pestle and mortar and grind up the salt, thyme, garlic, paprika and cumin along with a glug of oil so that it makes a rough paste. Set aside. Meanwhile get a large skillet really hot, smokin’. Sear the joint all over to give it a bit of colour, this may involve a lot of smoke, so if you have an extractor fan, crank it up. Oh yeah and don’t wear the clothes you’re going to entertain in, they’ll stink afterwards. 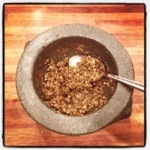 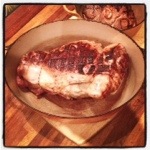 Once the joint has taken on a bit of colour (it cooks so slowly it’ll remain beige if you don’t do this step), transfer into a large lidded casserole and rub the mushed up cumin/garlic mixture all over it with a spoon. Don’t worry if it doesn’t all stick on, there’ll be subsequent basting. Pour in the stock and stick on the hob till it’s bubbling. Cover with a lid and stick in the oven. For a long time, maybe 7 hours, maybe 10. Every couple of hours give it a baste and top up the liquid (with something boiling) a bit if it looks like it’s drying out.

When you’ve decided it has been in long enough, remove the meat from the casserole, it’ll probably disintegrate but that’s not a bad thing. Pour off most of the fat from the pot and chuck in a few glasses of wine, boil and reduce by a quarter. Let’s call this the gravy or fortified jus. Spoon the meat (no carving, no resting required) onto plates and serve with  a starch of your choosing. I accompany this with an Ottolenghi bean salad and some smoked red pepper pesto artfully spooned across the plate. I haven’t mastered spoonage yet so my results are a bit Rorschachy.