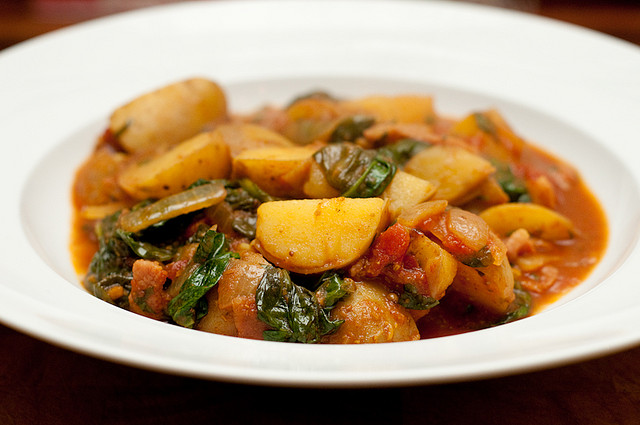 I kind of invented this by mistake. Supplies were running down in the fridge and I found the ingredients below, assembled them into a version of saag aloo a la Hugh. I’m sure it’s breaking every rule in Indian cuisine by adding the rashers, but I suppose you could omit them if you want to make it vegetarian. Anyway, it’s delicious by itself. Really delicious.

Method:
Chop the baby potatoes into cubes or crescents and steam for about ten minutes. Meanwhile chop the onion, garlic and rashers and fry in a tablespoon of olive oil or ghee if you have it for a few minutes in a heavy casserole or pot. Add the curry paste and keep everything on the move. Add the spinach. Toss in the can of tomatoes and bring everything up to a simmer. Then toss in the potatoes and stick a lid on your casserole and cook for another couple of minutes until the potatoes are tender. I poured in a few tbsps of the cooking liquor from the steamer. Season with the salt.